Something I’ve learned as I’ve gotten older is that I have less and less patience for cynicism.  5-10 years ago, when things weren’t going as well as I’d like them to, when I was out of shape, more insecure, and frustrated with my own life, it was easy to fall into the trap of negativity and cattiness.  We’re all guilty now and again of tearing someone else down – whether it be just in our own head or otherwise – to build ourselves up. It can be easier to look down our nose at things or criticize someone else to deflect attention away from our own fears or shortcomings.

However, the older I get, the more violently turned off by cattiness and cynicism I become.  I’m tired of hearing friends, acquaintances, internet trolls, and my own brain sometimes, being, for lack of a better term, just a big jerk.   Every single one of us has been the victim at least once in our life of hateful words. Someone has made us feel bad about ourselves or invalidated our thoughts or feelings.  It’s an empty, crushing feeling and it’s one that can be very hard to bounce back from.  Why, when we know how awful that feels, do we unleash that feeling on someone else? The boost you get from it is just as hollow – sugar for the soul that leaves you lazy and out of shape morally. 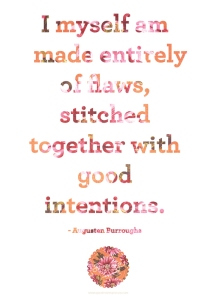 Everyone is entitled to their opinion. If you think someone’s wedding invitation is stupid, a stranger on the internet is crazy for flaunting her heavier frame, or people using cutesy terms like babymoon or calling their significant other some pet name is maddening there’s no one who is going to stop you.  None of that is illegal or really even wrong so to speak.  But why? Why do we find ourselves wasting so much energy on these little things that have nothing to do with me or you.  Someone is living their life and enjoying themselves, they’re not attacking anyone, and yet we often feel the need to lash out passive aggressively or behind their back.  We are a society of eye rollers.

I feel so much better when I’m around people who don’t engage in negativity – people whose currency is encouragement and positivity.  I am far from perfect.  I am just as guilty as the next person of engaging in gossip, general cattiness, and just big, fat, jerk-itude.  But I want it excised from my life completely, like a dark mass feeding on me, like a leech, I want it gone.   I really, truly feel in my gut that outward negativity is a reflection of personal insecurity or unhappiness.  I know it has been for me and so I’ll speak for myself only on that front.  And so, instead of turning my energy out when I have a negative, catty, or cynical thought, I’ve been trying lately to turn that energy back in.  Why did I just think that nasty thing about that person?  Why did I roll my eyes at that post? Why is this little insignificant thing bothering me SO MUCH.

I’ve noticed lately, maybe over the last year especially, that my best friend Meg and I often ask each other why someone would be so critical of someone else – we text the phrase “live and let live” way more often than you’d think.  And again, this is not holding myself or anyone else up as some bastion of moral strength.  It’s just something we both wonder about. Something we both notice a lot these days and something we’re both trying to be better at and avoid. For me, personally, cutting Facebook out of my day would go a long way to helping me live a more positive, productive life.  Social media and the internet in general, while immensely positive in many ways, also seem like a breeding ground for general nastiness – a place where you can forget that other people are human beings and revel in negativity.

I definitely don’t have all the answers but it’s something that I’m going to keep thinking on and I imagine I’ll only develop an even lower tolerance for it as time goes on. It’s not so much that turning 30 has made me a grumpy naysayer who doesn’t understand what’s wrong with kids these days, it’s just that as I figure out my own life more and more, I wonder why I was ever so critical of anyone else for trying to figure themselves out. As we share more of ourselves than ever via social media I wonder why it seems to have led to such an increase in criticism instead of high fives.  I wonder why, when we all struggle to “have it all” can’t we just be nicer to ourselves and our fellow wanderers?

One Reply to “Cynicism, Negativity, and Self-Destructing Your Own Youth”

Nothing else needs to be said really. @moemotivate #amplifymelanatedvoices
Today I want to amplify the voice of Dr. Jazmine @themompsychologist who has been one of the most remarkable voices I have been introduced to in the recent days and weeks. Like any good mental health professional Dr. Jazmine is a clinical psychologist) and mom Dr. Jazmine is clear, direct, and takes no BS. But she is also open hearted and compassionate. She’s not going to sugarcoat anything, comfort you or assuage you’re guilt, shame, or anger as you process and learn but her approach is both firm and encouraging. There are no shortcuts in important and difficult work and she won’t let you forget it. I highly encourage parents to follow, listen, and learn. #amplifymelanatedvoices
There is a lot I thought I understood, a lot I am trying desperately to understand, and a lot I will never understand. Being a “good person” is not enough. Being “not racist” is not enough. That’s a tough pill to swallow when I’ve gotten a pat on my back my whole life for simply showing up. Today I signed up for @rachel.cargle ‘s 30 day #DotheWork challenge. This course is designed to be an “eye opener and a call to action”. It’s basically a good first step. At the end of this course I don’t get to call myself “one of the good ones”. I won’t magically understand everything. But I will hopefully understand more and be more prepared to continue to do the work every day. If you’re fumbling around trying to figure out where to start may I suggest joining me? You’ll find more info in the link in Rachel’s bio. Art on first slide by the very talented @mimimoffie #amplifymelanatedvoices
Delete any black square post using the hashtag BlackLivesMatter or BLM now! Keep amplifying black voices that desperately need to be heard right now not suppressing them no matter how good your intentions were and are. Images on slide two found by @enylduj shared by @mspackyetti
In the last week I have flooded my feed with a lot of new voices and I think now is the time to be intentional. I want to take this opportunity to highlight some of the leaders and educators you can listen to, learn from, and support as we strive to be vocally anti-racist every day. It’s important that I and others keep in mind that it is not these, predominantly women’s, job to educate us but that we can continually learn from them if we listen, do the work, and for the love of everything stay out of their DMs. 🗣 @sincerely.lettie is so many things but as a passionate historian we have so much to learn from her. Everything starts with understanding history. I didn’t realize until late in high school how whitewashed and handpicked the history we learn is and while I have educated myself on the things left out here and there I have never taken the time to truly dedicate to understanding the full spectrum of our history. Lettie has, not only a great and engaging podcast but a patreon you can join to support her monthly and expand on the learning available in her podcast. It’s important that I not only show up to listen and learn but support - especially financially - as well. #amplifymelanatedvoices
NO JUSTICE, NO PEACE. ✊🏻✊🏼✊🏽✊🏾✊🏿 This is not about my experience. No selfies. No points for showing up to do the literal least I can do. I will never understand but I will always stand. I am listening. I am reading. I am educating myself so we can educate our son. What I saw today was powerful, moving, massive, & disruptive. It was peaceful. It was angry. It was anguish. It was love and community. This is the match that starts the fire so we can burn it down and build something new. Today and every day #blacklivesmatter ✊🏻✊🏼✊🏽✊🏾✊🏿
#blacklivesmatter period.
Grateful for these moments and this little person. ☀️#keatonfoxbycroft
We cannot simply throw up our hands and say “the system is broken”. We cannot stay silent or allow ourselves to be defeated because the work ahead is overwhelming. The system was created by white oppressors. This country and its wealth was built on the backs of the black community who are still denied a seat at the table and the right to exist without fear, abuse, and worse. If you find yourself arguing for the businesses and property lost you’re missing the point and you’re choosing the side of the oppressor. Remember that symbolic and peaceful protest has been met with the same resistance, hate, and violence. The message has been sent loud and clear that this country would prefer the black community to be silent. But we cannot let them be silenced and must use our voices to amplify theirs.
My dad always told me he was proud of me. He always told me he loved me. But I don’t have a lot of physical/written reminders of that. My mom always wrote the cards and my dad would sign so this exchange in particular from my 30th birthday means an incredible amount to me. My dad was always genuinely supportive of and interested in everything I did from the small stuff like clothes and style to the big life stuff. Even when I got made fun of it hurt but it never really discouraged me from being myself. It never really occurred to me that I would do anything different. I’m sure my dad had a lot to do with that mindset.
%d bloggers like this: