It’s not surprising to look back at some of our favorite TV shows and find that not all of their jokes and plot lines have aged gracefully.  Friends, for example, has inspired many a think piece on the running jokes about Fat Monica or Ross’ inability to accept a male nanny as his child’s caregiver.  The show ran for a decade and a lot has changed since its finale in 2004, not to mention its debut over 20 years ago in 1994.  But even more recent shows are not immune to tone deaf story decisions.  Case in point – How I Met Your Mother.

Premiering in 2005, How I Met Your Mother filled the void left by Friends in many ways.  A group of white twentysomethings living and working in NYC, spending an inordinate amount of time in the bar downstairs instead of a coffee shop, Ted, Marshall, Lily, Barney, and Robin, were Americas new favorite friends for 9 seasons.  The show had its finale just three years ago in 2014, and as a result it’s easy to think of HIMYM as a modern show that should pretty closely reflect our values today.  And yet…

Back in Season 4 of the show there is a dubious episode entitled “The Naked Man” which originally aired in November of 2008.  In the episode, Robin finds herself on a blind date with a fellow named Mitch.  When she steps out to take a phone call, Ted enters the apartment to find Mitch sitting on their couch naked.  He explains that this is “his move” saying,

“It goes like this: you’re on a first date, you’ve had a few drinks.  You make an excuse to go up to the girls apartment. Then, once she leaves the room, you strip down naked and wait.  When she comes back, she laughs.  She’s so charmed by your confidence and bravado, she sleeps with you.  Boom.  […] The naked man is best used as a last resort.  A hail Mary on a first date when you know there’s not going to be a second.  […] My only shot with a girl like Robin is the element of surprise…and let’s be honest, a little pity.  It’s shock and awwww.”

The episode plays off Mitch’s actions as lighthearted and goofy.  Robin herself describes it as “funny.” To make matters worse, while recounting the encounter later at the bar, Marshall declares Robin is a slut saying that her actions make it seem like the only thing standing between her and sex are clothes. Watching endless loops of the show while falling asleep or getting stuff done around the house, the episode had always made me cringe but in a time where Harvey Weinstein and Louis C.K. among many others have had their heinous actions laid out in the open for all to see, the episode plays like a horror film with a laugh track – a step by step guide to sexual misconduct. Mitch’s actions are assault, plain and simple.  He doesn’t get Robin’s consent to see him naked.  In fact, he KNOWS she’s not into him and most likely not attracted to him and still makes the decision to expose himself to her.  She’s coerced into sex, slut shamed by one of her closest friends, and then subjects herself to another date with the creep in order to “defend her honor” and prove she’s not a slut. 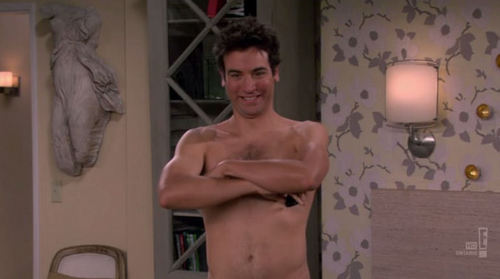 On this Stockholm syndrome date, Mitch admits that he knows he’s the only one who had a good time during their “encounter” the night before.  Meanwhile, Ted, Barney, and Lily are all trying the naked man for themselves.  Proving Mitch’s stat that it works 2 out of 3 times, Ted and Lily are successful while only Barney is met with the appropriate “sick son of a bitch” response by his target.  In the end, they all raise a glass to Mitch who they celebrate as a hero.  The episode is almost a decade old but it is shockingly tone deaf in today’s climate.  While some of Friends’ storylines are cringe worthy or un-PC by today’s standards, I can’t recall any as top to bottom ill-advised (at best) as The Naked Man.